Seattle Hack 4 Change was an amazing day of making at the Seattle City hall as part of the National Day of Civic Hacking. Across the country, communities came together to imagine, design, and prototype technologies to make their communities better. I just moved to Seattle a week ago as part of my internship in the area; the National Day of Civic Hacking offered an unusual opportunity to serve my summer community in a way that usually isn't possible without years of residence.

Saturday's event was attended by a diverse range of community members. Some came with needs, like the animal shelter that orgnanized makers to help find homes for cats that might otherwise be euthanized. Some worked towards ongoing projects, like the team from Open Street Maps who added new building and address information to their map system. Some companies enhanced their products to serve the public better by adding automated access to city data. Others brought new project ideas, like the SeattleMonkeys team (which I was on), who built a voice-based community feedback campaign. Everyone brought their curiosity and passions to imagine ways to design for the public good.

Hack for Seattle also included around 40 students from MESA, a youth science engineering program that has supported minority youth in Washington for almost 40 years. Students created paper prototypes and in some cases working apps to address the needs of young people in schools. We were all inspired by their enthusiasm and creativity.

Here is a list of projects created during Seattle's Hack4Change event:

(photos withheld until we can get verify permission from MESA)

by Earl Scales and Torrin Todd 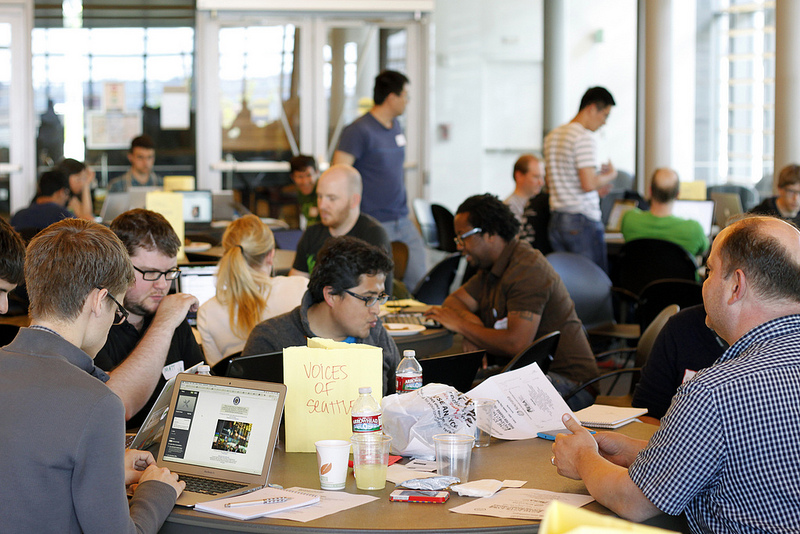 Here It Is Parks (a)